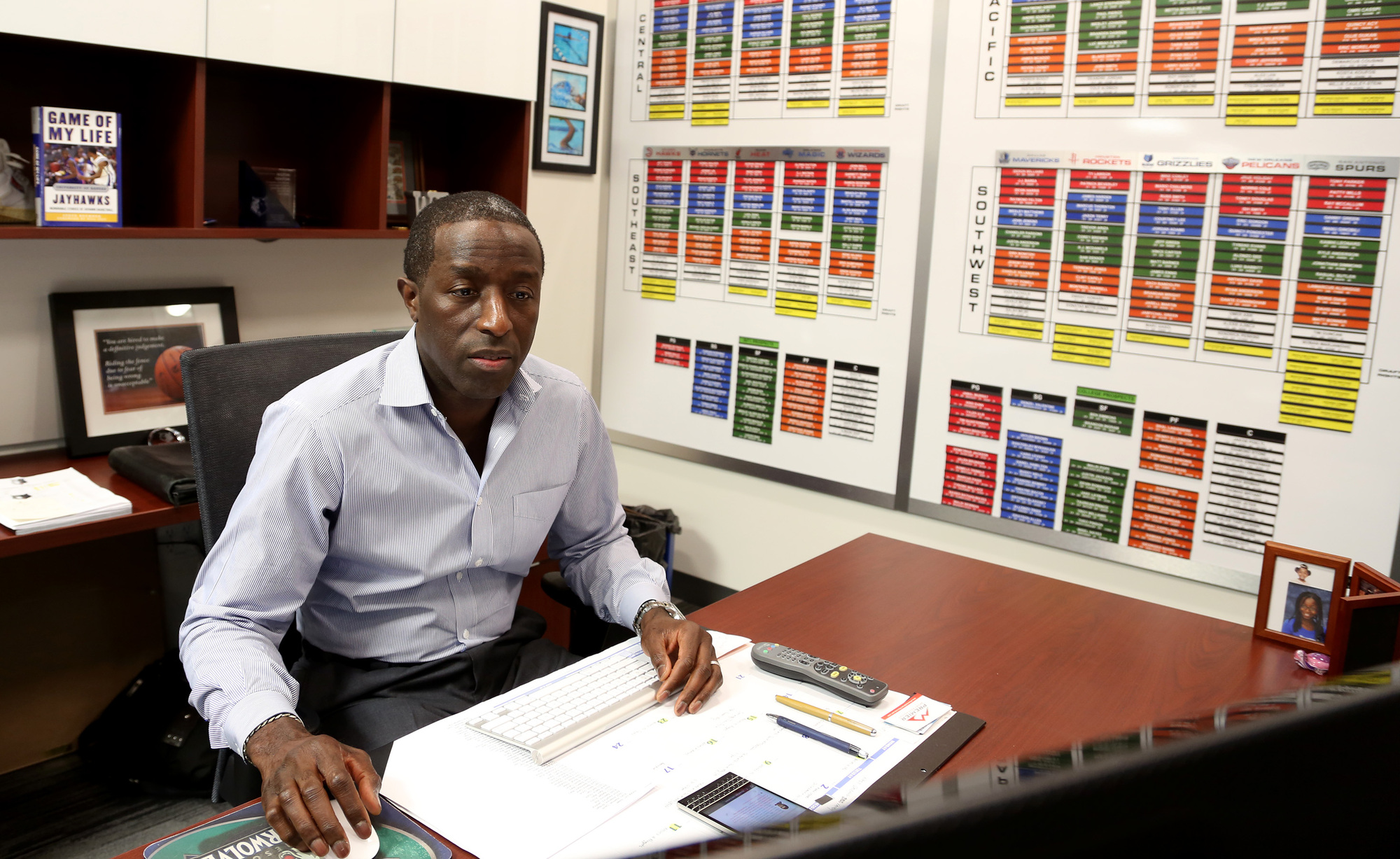 There’s a meticulousness to everything Milt Newton does, from the way he dresses to the way he keeps his office.
Photo Credit: KYNDELL HARKNESS • KYNDELL.HARKNESS@STARTRIBUNE.COM

He had no shoes to fill, no footsteps to follow. Maybe that’s why owning his own Pro-Keds became so important, why as an adult he would fill his closet with immaculate pairs of wearable art.

Milt Newton, general manager of the Timberwolves, grew up in the Virgin Islands. He owned one pair of what the kids called “bobos” — cheap, all-purpose shoes he wore to church, school, work and on his daily trek to the island’s basketball courts.

Even as he dribbled the orange right off the one, cheap basketball he owned, Newton as a grade schooler coveted a pair of white Pro-Keds, “the best basketball shoes you could buy back then,” he said. So he went to work.

He’d buy newspapers for about 15 cents apiece and sell them for a quarter. A month later he was wearing Pro-Keds everywhere he went, wearing down the tread during long, solitary practices that made him late for so many of his mother’s dinners and curfews.

Long before he became a high school star, a college champion, a professional player and executive, Newton knew how to work for what he wanted, and what he wants now is to build the Wolves into a championship team.

“Not having my biological father in my life, I always yearned for something more,” he said. “There were things I wanted that I couldn’t get. We grew up on welfare. Early on I realized if I wanted something I was going to have to go and get it.”

Before Flip Saunders passed away this fall, Saunders was the do-everything team president and Newton his consigliere. Now Newton holds the top basketball job for the franchise with the one of the league’s most promising rosters and is instilling concepts of team building he developed playing basketball all over the world.

He grew up in Savan, “one of the toughest parts of the Island,” he said. As a seventh-grader he’d cut classes and skip homework to play basketball. His mother and uncle would frequently “tighten me up,” he said, using slang for corporal punishment. Finally his mother told him he needed a male role model in his life. She sent him to live with relatives in New Jersey.

The cousin was married and had a son. The living arrangement lasted a year.

Newton was given a choice: Go back to the Islands, or join Aunt Sheila in Washington, D.C.

“I felt like there was nothing for me on the Islands,” Newton said. “It wasn’t a tough decision.”

Sheila Benjamin, an Air Force lifer, took him in.

“He thought I worked at the White House,” Benjamin said, chuckling.

In D.C., Newton befriended Wesley Harvey, who offered Newton rides to and from school in his beat-up Datsun with the hole in the floorboards, and soon began bringing Newton home.

“I couldn’t have children of my own,” Amos said. “Agent Orange took care of that in Vietnam. We were down on the ground getting sprayed and shot at and bombed. But God had a plan.”

Amos was strong enough to discipline Newton not by imposition but example.

“You’ve got a 6-5, very strong young man standing in front of you,” Amos said. “I’m certainly not going to take him on mano-a-mano. But that’s not what we do. What we do is demonstrate a lifestyle, and they have to choose it if that’s what they want.”

Amos and Benjamin insisted Newton do his schoolwork and adhere to curfews.

“He was still a kid when I left the Islands, so I don’t know what he was like there,” Benjamin said. “Here, with me, we had a great time. Everything I remember about him being here is good. I didn’t have a kid of my own, but I looked at Milton like he was my son and I brought him up that way.

“He was easy because if I ever needed to find him, all I had to do was check at the basketball court.”

One of the ‘Miracles’

Newton excelled at Coolidge High in D.C., attracting college recruiters. He chose Kansas, where Larry Brown was looking for rangy athletes to play his up-tempo style.

In 1988, when Newton was a junior, the Jayhawks won the national title. They were called “Danny and the Miracles” because of Danny Manning’s wondrous play. Newton’s life was trending toward miraculous.

He worked his way into the starting lineup and in the championship game made all six of his shots, including two three-pointers. Newton joined his roommate Manning on the all-tournament team.

“He was always ahead of the game mentally, and he had a great understanding of people,” said Manning, now the coach at Wake Forest. “Athletically, he was as good as anybody I’ve seen, especially on the college level.

“He didn’t play much at first, but he always put the team first and kept working. In my eyes, he was always preparing himself to be an executive.”

Milton went undrafted, then went to camp with the Los Angeles Lakers. He wound up playing in the CBA, and in Belgium and Australia.

[Amos] was always worried about the future,” Newton said. “He told me, ‘Milt, your dream is to make it in the NBA. Don’t chase the NBA in Europe.’ ”

When his dream of becoming an NBA player waned, Newton got his master’s degree.

“The people I graduated with left school saying they wanted to be an athletic director or the manager of a sports complex,” he said. “I said right then I wanted to be an NBA general manager.”

He reached out to Brown, who told him to call back a day later. Newton thought Brown would give him advice, or contacts. Instead, Brown had set up interviews with the Indiana Pacers and Denver Nuggets, who hired him.

Newton has worked with USA Basketball, the Philadelphia 76ers, and the Developmental League. He first worked with Saunders with the Washington Wizards, Saunders’ third NBA coaching stop.

On a recent weekday, Newton spoke in a conference room overlooking the Timberwolves’ basketball courts. He is tall and lean and usually dressed immaculately. You get the impression lint is afraid to land on him.

In Saunders, the intense Newton found an executive who succeeded with a smile.

“I don’t consider myself to be an easygoing guy,” Newton said. “I tell my staff, ‘You’ll never leave a meeting with me confused. You will always know what I expect from you.’ Working with Flip, I saw someone who could reach people with a joke.”

“ ‘I can tell you one thing — on-the-job experience has been the most important thing for me,” Newton said. “I gained a valuable education at Kansas, but nothing really can prepare you for that job other than being in the job.

“It took me a while to get here, but going through all of those experiences, all those different jobs, and now that I’m here … well, I’ve always wanted to put a team together.”

As a boy on the Islands he met Julius Erving. Now there is a court named after Newton there, where he has founded a charitable organization — Emerald Gems Foundation — with his wife, Shalaun, a Minnesota native. The headline at Emeraldgemsfoundation.com: “Basketball Is Hope.”

Newton graduated from Pro-Keds to low-top Puma, Dr. J Converse, Nike, Brooks, and the polished leather that fills his closet today, but now cares more about the path than the shoes he’s wearing as he walks it.

“On the Islands, if you got a hole in your shoe, you covered it up with cardboard,” Newton said. “The first time I bought my own, I was like, ‘Wow.’ Now I’m trying to get away from that because they’re material things. They’re meaningless. I give away shoes now.

“I’ve gotten over the things that drove me as a kid. I have moved on to more important matters.’’