The Emerald Gems Foundation held its second news conference in two days at Ivanna Eudora Kean High School on Thursday to announce the donation of over 150 basketballs to public high schools in the Virgin Islands.

Milt Newton, the assistant general manager of the NBA-leading Milwaukee Bucks and 1987-88 National Champion as a member of the Kansas Jayhawks, founded the Emerald Gems Foundation with his wife Shalaun Newton in 2015.

Approximately 50 people attended the event, including representatives from 12 of the public schools on St. Thomas and the Eudora Kean basketball team.

Emerald Gems partnered with the Department of Education, Sports Park and Recreation and the office of Senator Athneil Thomas to make the donation possible.

Newton “didn’t hesitate, didn’t talk about figures and how much it was, but right away he said we are going to take care of it,” White said.

The foundation’s mission is to enhance the lives of youths in the Virgin Islands by providing positive experiences and lifelong learning opportunities through basketball.

Newton said his goal “is to be known as one of the great Virgin Islanders that gave back, to be someone that came up on this soil and used means and blessings that I had to give back to thousands and thousands of people.” 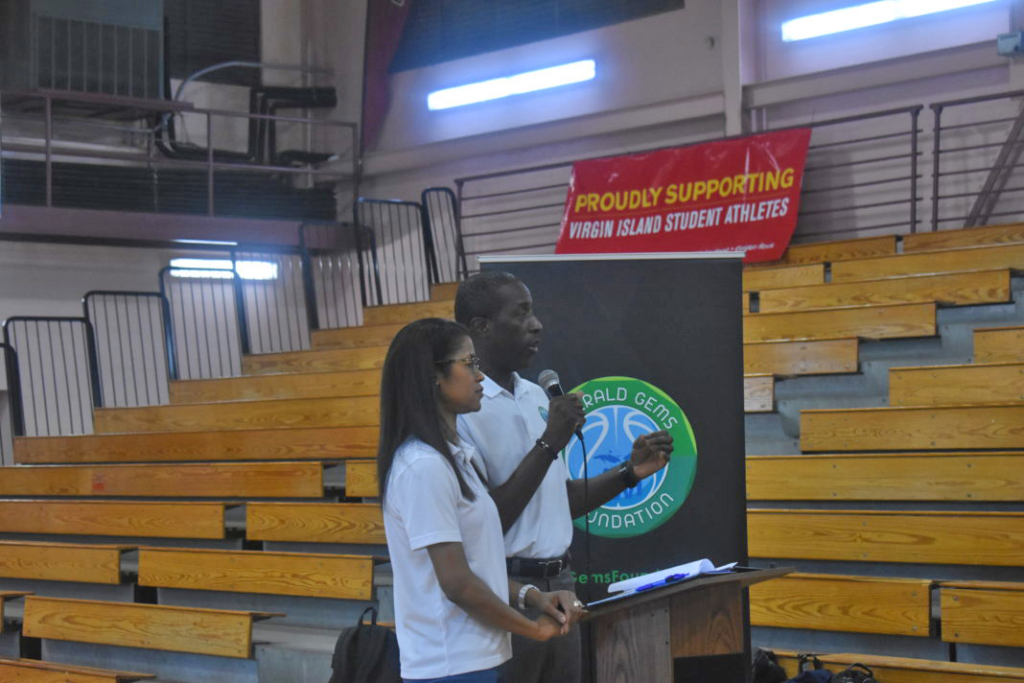 He said the Bordeaux Playground being named after him was one of the biggest honors in his in life. “Winning the National Championship in 1988 is an incredible feeling, an incredible journey but when it comes to one of the greatest things that happened in my life, in terms of accomplishments, having a park named after me that I grew up on playing, that’s number one, you can’t beat that, it’s a great honor.”

One of the foundation’s next goals is to bring NBA Math Hoops to the Virgin Islands in the near future.

Math Hoops is a comprehensive community program, featuring a basketball board game, mobile app and curriculum, that allows students to learn fundamental math skills through the game of basketball.

The impact of the program has already been felt nationwide. In a 2018 survey, 92 percent of participating educators believed that Math Hoops made math more accessible and relevant to their students.

The foundation’s name was chosen because the Virgin Islands are said to be the “Emeralds of the Sea” and Newton said he also sees the territory’s youths as gems.

Since its inception the foundation has hosted free basketball camps for Virgin Islanders ages 8-17. Participants have had the opportunity to be coached by professional basketball players. The foundation has also held coaching seminars and donated funds to hurricane relief efforts in 2017.

More information about the 2020 camp can be found here.